A poster summarising this project as per March 2017 can be downloaded here. It may be used and reproduced freely, provided it is not changed. 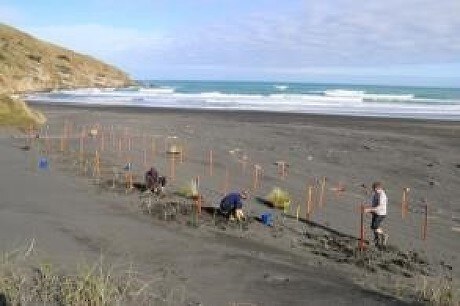 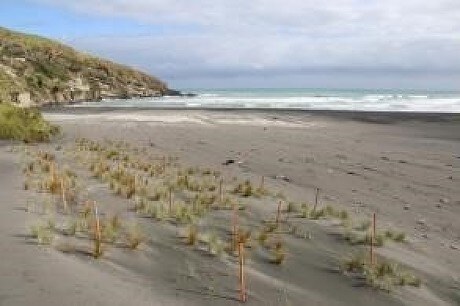 Foredune vegetation comprising spinifex and pingao five months after planting in 2016Over the last two decades, significant progress has been made with restoration of degraded sand dunes using community-based approaches on high-use publically owned land. However, significant difficulties and failures have been experienced on particularly exposed coastlines, sometimes in more remote locations, and where significant weed problems occur.

This project works with local communities, landowners and the Waikato Regional Council to restore severely degraded coastal dunes at difficult sites on the east and west coasts of the Waikato Region. Guidelines and case studies will demonstrate options for restoration of similar sites elsewhere throughout New Zealand.

The primary focus is on preparation of guidelines for community and management agencies, and is a step-by-step approach to restoration of our most challenging dune systems to avoid major losses of plants and other resources. The project is funded by the Department of Conservation’s Community Fund in collaboration with Waikato Regional Council, local landowners, and Beachcare groups.

Restoration of two severely degraded weed-dominated backdune sites on the Waikato east coast which are typical of modified dune sites at urban/resort communities elsewhere in the country:

Whangapoua Beach - restoration work end of Year 2Sites have expanded and now include locations at Whangapoua, Whitianga, Cooks Beach, Tairua, Pauanui and Whangamata, where frontal dune areas are dominated by dense exotic vegetation communities, or where the original dune was bulldozed level at the time of development and then grassed, often over a clay/fill cap. As dunes are dominated by exotics, a ‘whole-of-dune’ approach involves:

Guidelines will focus on community-based restoration of difficult sites in the form of peer-reviewed Technical Articles published as part of the Dunes Trust Coastal Restoration Handbook and will also draw on lessons learned from a wide range of other projects on the Northland, Auckland, Waikato, Bay of Plenty, Taranaki, Kapiti, Tasman, and Pegasus Bay coasts.

Year 1 of the project involved the establishment of the first year of site preparation and planting programmes at each site in collaboration with the Waikato Regional Council and local landowners and Beachcare groups at each site. These early planting programmes have been assessed for performance during Year 2 and further planting has been undertaken at each site. Technical reports illustrated with photographs and graphics have been completed for Year 2 covering all sites and these are summarised below.

The Difficult Sites dune restoration project at Mokau extends along the seaward margin of the Seaview Motor Camp. The aim is to restore a naturally-vegetated dune over a width of at least 30 m - from the toe of the frontal dune through to the backdune. The dune restoration will include a spinifex-dominated frontal dune and a second more landward backdune area vegetated in appropriate native backdune vegetation (e.g. native vineland and rushland).

Restoration of the frontal dune is the key element being monitored as part of the Difficult Sites project. The more landward dune restoration will integrate back into the future developmentAt the start of the project, there was no existing natural foredune along most of the coastal margin; the original dunes having been levelled to form the flat grassed campground; the flat grassed area bordered along the seaward margin by trees and shrubs planted as a wind-break. The restoration is further complicated by a severe erosion phase (stillongoing), the high wind and wave energy of the site and limitations imposed on the restoration by the desire to maintain the maximum width of campground practicable in the interim and concerns regarding disturbing of possible Maori cultural sites within the dunes.

Typical view of the modified frontal dune in central areas of the site prior to restorationIn Year 2, the focus has been on completion of that restoration work, ongoing maintenance (planting and weed control) as required and periodic monitoring of the site and the ongoing erosion.

Year 2 work at the site included: 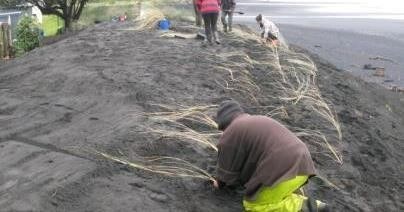 Restored area during planting in Year 2

Several months later (August 2016)Nonetheless, the project has proved very challenging with a number of significant difficulties including:

Nukuhakari Station is a large sheep and cattle farm located on the west coast north of Awakino and south of Marokopa Beach. It has landward migrating dunes lacking in vegetation cover associated with three bays exposed to the prevailing westerly winds. Stock access over many years has led to serious degradation and wind erosion, with extensive mobile sand dunes now covering several hectares comprising both frontal and backdune environments. 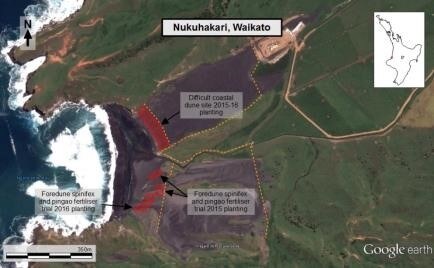 Location of the spinifex and pingao foredune planting trials comparing fertiliser types and the 2015-16 difficult site plantings at Nukuhakari Station, west coast North IslandNgararhae Bay (Middle Bay) comprises two actively moving sand dune sheets that dominate the local landscape covering an area of over 30 ha where wind-blown fine, black sands are engulfing pasture landward. Plantings in 2015 and 2016 comprised largescale planting along a very exposed northern section and establishment of fertiliser trials along the foredune some 20m above the high water mark at the southern portion of the dune field.

Koi carp a pest fish harvested from lakes of the lower Waikato by the Waikato Regional Council was available in pelletised form and was compared with the standard fertiliser practice at planting of using fertiliser tablets. Several rates of fertiliser for both koi carp and fertiliser tablets were tested for applying to each sand binder (spinifex and pingao) at planting in groups along the foredune. 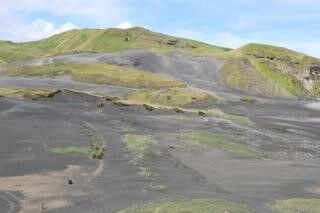 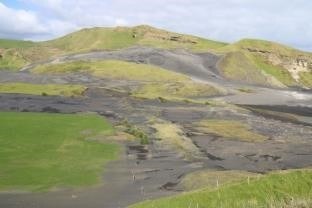 By April 2016 further planting of spinifex and pingao as part of the Difficult Sites project has seen development of a spinifex dominated foredune that has added to the few previously planted spinifex toetoe forming a dune that has reduced landward migration of sand and allowing the landowner to attempt resowing pastureAssessment of the plantings completed in mid-2016 has seen a significant increase in growth of a foredune as a result of the planted sand binders, particularly spinifex. Some toetoe planted in previous years landward of the spinifex dune has also continued to grow and assist in dune development. The established zone of spinifex has reduced sand movement landward and has allowed the landowner to attempt to re-grass several hectares landward that comprised largely a cover of fill that had been placed there previously.

Planting of several thousand spinifex in 2015 and 2016 is well underway to forming a vegetation foredune and reducing sand movement landward. Targeting areas between existing vegetation to form a continuous zone of vegetation is proving successful. 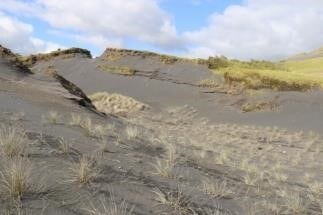 Note the earlier planted spinifex in the background within the blowout is now surrounded by further plantings in 2015 and 2016.Overall, results indicate that koi carp gives a similar boost to growth of sand binders as the standard current practice of using slow-release fertiliser tablets. The substantial boost in growth by fertiliser compared to non-fertilised control plots is consistent with previous research and operational plantings over the last two decades for pingao (Bergin and Herbert 1998) and spinifex (Bergin 1999). 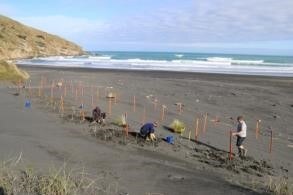 Establishment of the fertiliser trials as part of the Difficult Sites project in collaboration with the Waikato Regional Council and landowners on the Nukuhakari Station dunes. 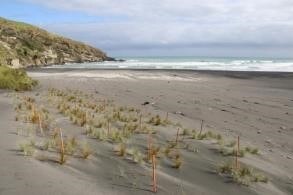 5 months after planting in early 2016.Planting in 2016 has continued to increase the zone of foredune vegetation adding to earlier successful plantings. 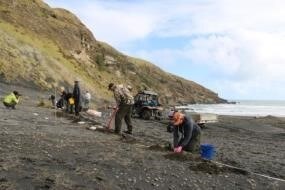 Planting August 2016 - Landowners Hamish and Bridget Nelson (fore-ground) getting stuck into the planting. The trial blocks were laid out prior to planting to ensure the correct planting pattern and even distribution of seedlings across the site was achieved.The focus of work in Year 3 for the Nukuhakari site will include:

As part of this project the eastern Coromandel project sites have expanded and now include locations at Whangapoua, Whitianga, Cooks Beach, Tairua, Pauanui and Whangamata.

The project sites at each of these locations consist of frontal dune areas dominated by dense exotic vegetation communities and other areas where the original dune had been bulldozed at levelled at the time of development and then grassed, often with a clay/fill cap. At most locations the degraded dunes are also directly backed by private beachfront properties.

These sites are typical of degraded dune sites at urban/resort communities, particularly along the eastern coast of the North Island but also elsewhere. As outlined in the Year 1 report, the restoration at all eastern Coromandel sites was undertaken as part of the Waikato Beachcare programme; a partnership between Waikato Regional Council (WRC), Thames Coromandel District Council (TCDC) and the local resident and absentee communities. Similar work at Whiritoa Beach in partnership with WRC and Hauraki District Council will also be reviewed as part of the final guidelines.

Year 2 progress is summarised for Whangapoua Beach and Cooks Beach. Details on progress for the other Coromandel beaches now part of this project are provided in the Year 2 progress report.

Restoration work towards end of Year 1.

Year 2.Initial project work at Whangapoua Beach in Year 1 focused on the northern end of the beach, restoring a natural frontal dune over the full width of the reserve back to private properties behind. Prior to restoration the area was dominated by dense exotic vegetation.

Details of the Year 1 work and earlier restoration in this area were included in the Year 1 report. The work has been very successful as views of the site from the end of Year 1 and Year 2 illustrate.

The focus of work in Year 3 will include: 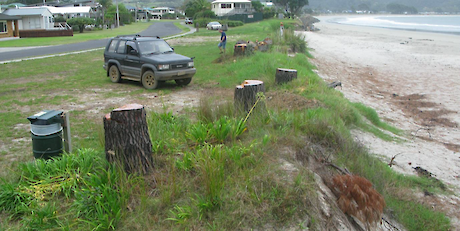 Year 2: after spraying and earthworks and during planting

The works involved removal of pine trees, spraying of the grassed areas, reshaping and earthworks and plantings. As with the work at Whitianga, the restoration was undertaken near the peak of the erosion cycle to ensure a sustainable width of dune after future erosion cycles. The restored area is expected to accrete seaward by at least 10-15m over the next few years as the shoreline has now moved back into an accretion cycle. However, there will be further erosion cycles in the future and so it is important to design the dune to accommodate these.

The restoration works at the western end of the beach focused on the area where restoration commenced in Year 1 – improving plant density and biodiversity within the area. In Year 2, sand pimelea planting eco-sourced from local populations was also used to extend the remnant local areas of this species.

In addition, Year 1 and earlier restoration work was also regularly inspected and monitored over the year, looking at growth rates, plant cover, diversity, performance of different species and any weed invasion or pest animal issues. Regular weed control was also conducted over the year. 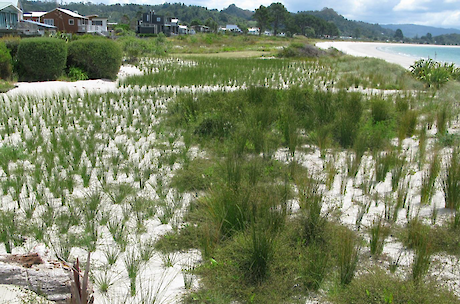 Cooks eastern project area towards the end of Year 1. 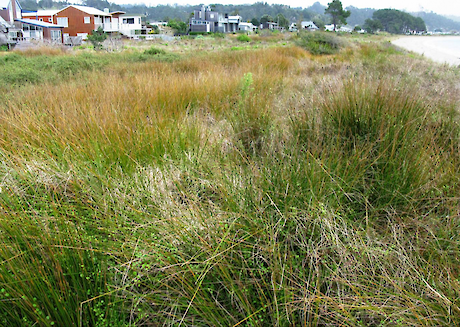 Towards the end of Year 2.In Year 3, work will focus on further restoration at both eastern and western ends, ongoing monitoring, ongoing weed control and reporting.