A project replacing coastal pines with native coastal forests is being run by Tāne’s Tree Trust and supported by us to the tune of $2500 per year for three years as well as in-kind support. This project is funded by the Ministry of Primary Industry’s Sustainable Farming Fund as well as advice, labour and funding from our many council, forestry, iwi and community project partners. Here is the second update about this project:

The Tāne’s Tree Trust Coastal Buffers project focuses on the upper North Island as a pilot study exploring practical options to transition failing exotic buffers to resilient permanent indigenous coastal forest buffers. To date the project has undertaken a review of existing experience, field surveys and established initial planting trials in collaboration with forestry managers, iwi, landowners, councils and communities. The final output from the project will be to use the trial and survey results to develop 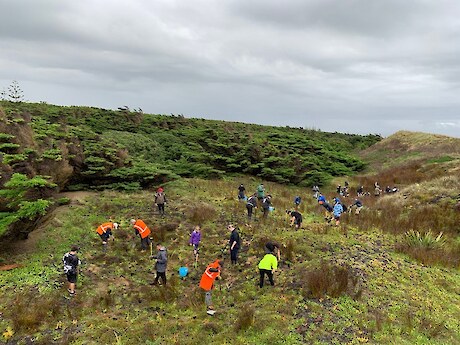 The key objective is to determine a suite of cost-effective methods for conversion of the exotic dominated coastal buffer to natives. This is likely to comprise a number of approaches where the aim is to assist natural succession wherever possible.

During the 2020 winter, further trials have been established at the Te Hiku (summit Forests - Far North), Kahwia (Tainui-Kawhia Inc - Waikato west coast) and Opoutere (DOC/iwi - Coromandel) sites. Additional species to those planted in 2019 were established to evaluate suitable species for conversion of exotic coastal buffers to indigenous coastal shrub and forest sequences. 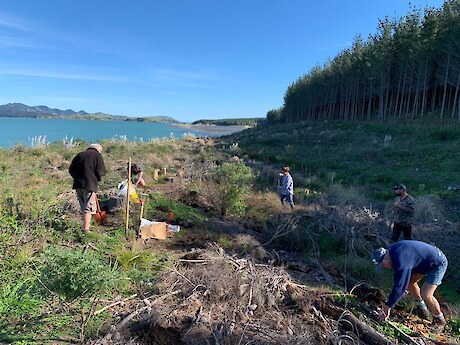 The initial 2019 trials at Te Hiku were reassessed following the severe drought over summer. Indications from this assessment are that there may be a beneficial effect from the pine shelter although the limited survival rate makes drawing conclusions difficult.

Browse from horses and rabbits/hares was more frequent in the open coast sites compared with the pine gap and canopy sites. Pohutukawa did not show any pressure from browse but there was heavy loss due to low soil moisture.

New trials were established including the planting of 1,550 plants in open, shelter pine gaps and under pine canopy situations evaluating 19 different shrub and tree species. Trials using seed of a few large-seeded plants were also repeated. 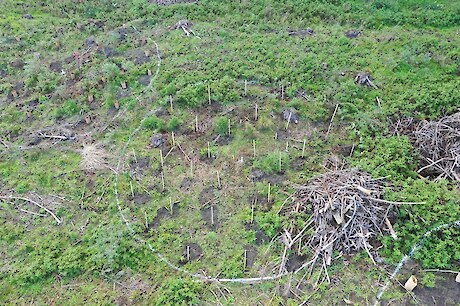 Reassessment of the initial 2019 plant trial found similar plant losses with the extreme summer drought. Another finding from the plastic plant protector treatment (to avoid animal browse) was the unintended consequence of overheating some plants during the summer. There were indications that the natives planted in close proximity to shelter and shade provided by the northern slope of pine trees had higher survival rates. Similarly, there appeared to be higher survival rates for plants where there was extra shelter at a microsite level from slash piles, dead pampas or lupin.

During 2020 a further 4,000 plants were planted, 800 of which were incorporated into the 2019 trial site and the balance in the 2020 Takapuwahia site trials. This site was a relatively flat backdune with slash and scattered regrowth of mostly exotics 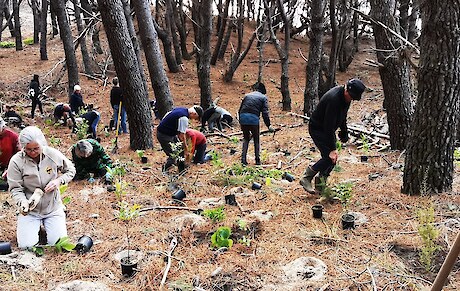 Planting of new trial under forest canopy at Opoutereincluding lupin, inkweed and pampas.

Reassessment of the initial 2019 plant trial found the plantings were significantly affected by the extended 2019-2020 drought. Some species were also affected by rabbit browsing. There were clear results for which species could survive planted out in the open and despite the summer drought, e.g. karo, akeake. Results from plants with some shelter from pines showed indications that a few canopy species could establish. However firm conclusions could not be drawn due to the high mortality rate exacerbated by the drought. 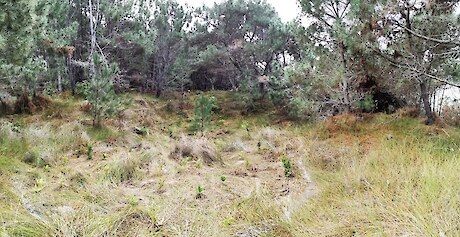 Views of new trial in pine clearing following completion of planting, Opoutere.In 2020 a further 3,455 plants were planted. This included the establishment of new trials under pine canopy and in a clearing surrounded by pine forest. The new trial sites included 9 different tree species. 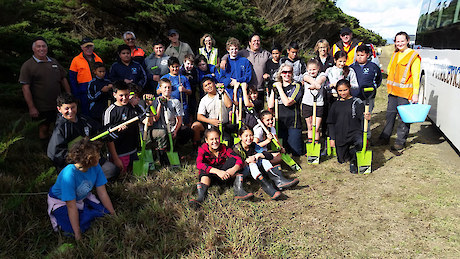 Planting has started in the Coastal Buffers project led by Tanes Tree Trust, which the Coastal Restoration Trust is supporting. The project is exploring practical options to transition failing exotic coastal forest margins to resilient permanent buffers made up of native coastal species. 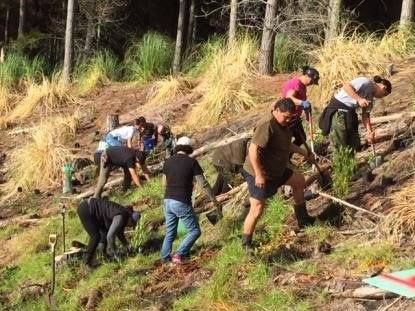 The plant species selected for the trial plots reflected the range of possible historic coastal forest species at each of the sites but constrained by eco-sourced plant availability. For the exposed open coast plots only a limited selection of hardy primary canopy species was used.

In total over 6,500 plants will be put in the ground this winter by project partners and community volunteers. The survival and growth of these trees will be monitored as part of the project and planting will continue at the three sites next year.