The plants and animals that live in dune environments are especially adapted to cope with their constantly changing and often severe environmental conditions. They must be salt tolerant, able to exist with tides and sand movement, changing fresh ground-water levels, sun and wind exposure - not to mention people and predators. Remember to check our database for information that you can’t find on our website.

Foredune vegetation plays an important role in natural beach and dune dynamics and in beach and dune values. In particular, natural dune repair after storms is critically dependent on the presence of appropriate sand trapping vegetation on the seaward face of the dune. In New Zealand, the key native sand binding species on the seaward dune face are spinifex and pīngao.

While many exotic species have been used to stabilise dunes such as marram grass (Ammophila arenaria), ice plant (Carpobrotus edulis), and kikuyu grass (Pennisetum clandestinum), experience has shown that these species are not as effective as spinifex and pīngao in repairing storm-damaged frontal dunes. 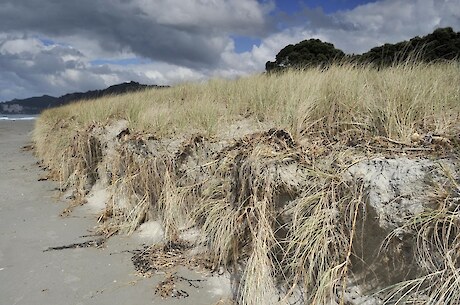 Spinifex growing down a storm erosion scarp. Photo: J. BarranWith a good cover of spinifex and pīngao on the seaward dune face, natural dune repair between storms will be more effective.

Substantial effort by the Coastal Restoration Trust and partner organisations has gone into collecting, propagating and establishing our native sand binding species spinifex and pīngao so they can be restored back to beaches. In many parts of the country, there are restoration programmes to manage this foredune zone. We are now looking to both maintain this zone and develop restoration methods for backdune ecosystems. 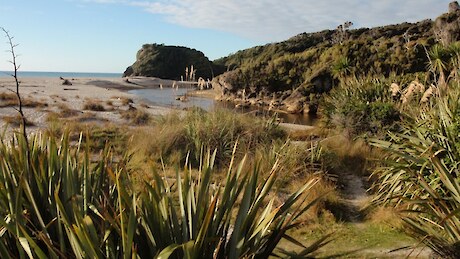 Ship Creek South Westland has some of the best remaining backdune plant communities in NZ. Photo: D. BerginThere are very few remaining sites in New Zealand that have a good natural range of coastal backdune vegetation. Backdune areas have been modified to the extent that many are now car parks, grass reserves and productive landscapes such as farms and pine forests. The Coastal Restoration Trust has undertaken a three-year backdune project to review and develop methods to restore backdune ecosystems.

This section is currently being developed and will provide information on identifying and controlling priority weeds in dune systems as well as case studies on how restoration groups have tackled weed issues. If you need information about weeds now - go to www.weedbusters.co.nz.

A separate page tells you all about coastal lizards of New Zealand.

This section is currently still being developed and will provide information on dune fauna such as insects and birds.

Some research was done by the forerunner of our trust together with Forest Research on the control of rabbits and hares in 2005: Rabbit and hare control in the coastal environment of New Zealand.

This section is currently being developed and will provide information on which animal pests to look out for in coastal dune areas. It will also provide case studies on how different groups have managed pest animals.

One of 30 species of fungi added to the threatened species list in 2020 is Abstoma purpureum. It is an endemic puffball with a very hard surface like a golf ball found only in sand dunes and is known from just three locations (Levin in the North Island and Karitane in Otago being two). It was seen seven times between 1920 and 1949, but hasn’t been recorded since.

The puff balls are described as ‘noticeable’, but because of the loss of indigenous dune habitats, it’s now endangered. It may even be extinct.

It is an example of a fungal species that is vulnerable to climate change, as the rising sea takes a toll on sand dunes.

If you spot interesting fungi please don’t pick them. Just take photos and put them on iNaturalist or, if you think you’ve found something special, contact your local DOC office to get it identified.