New Zealand’s lizards are often described as our forgotten fauna. They are often overlooked in conservation projects because they are more cryptic (harder to find) than native birds- but they are also more diverse and threatened than our native birds. There are currently 105 species of native skink and gecko, some of which haven’t been formally described yet (new species are being discovered on an almost yearly basis). Only nine of these species are considered “Not Threatened”, leaving 96 species (91% of our lizard fauna) at risk or threatened with extinction. 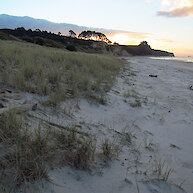 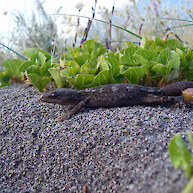 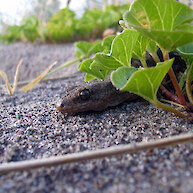 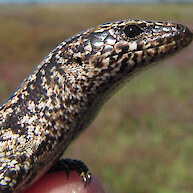 One species, the cobble skink, was discovered less than 10 years ago and the entire population (only 40 animals) is held in captivity because their coastal habitat was destroyed. The cobble skink was abundant along a discrete patch of boulder beach coastline near Westport. In the 10 years since it’s discovery, the species rapidly declined until the last population was trapped between the Granity pub and the Tasman sea on an eroding piece of beach. The future for this species is bleak unless its habitat is restored and the species returned to the wild. 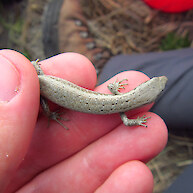 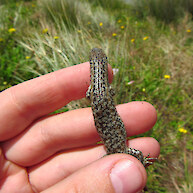 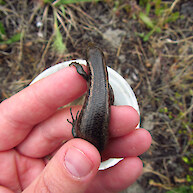 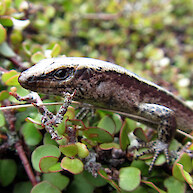 But it’s not all doom and gloom. Thanks to restoration and pest animal control, a few lizard species are beginning to recover. There have been a number of successful projects where pest control (or eradication when possible) combined with restoring native vegetation has resulted in increasing lizard populations. The key things to keep in mind when restoring habitat for any animal are; what do they eat (food sources), what eats them (predators), and where do they hide (refuges).

There are mountains of evidence about the impact pest mammals have on native wildlife. You are probably familiar with the war on rats, possums and mustelids, but mice and hedgehogs are also major lizard predators. Rats and mice are possibly the worst of the bunch because they affect all levels of the ecosystem, eating seeds, eggs, chicks, invertebrates and lizards.

Being ectothermic (cold blooded) makes lizards especially vulnerable because if a predator finds them during winter they don’t have the energy to run away. Smaller lizards can hide in small cracks and crevices where only a mouse can reach them, but the larger lizards aren’t so lucky. All of our larger skink and gecko species are either safe in predator-free reserves, or rapidly declining due to predation. On pest-free offshore islands the lizard populations increase exponentially. Pest suppression on the mainland also results in native species recovery, but the control needs to be long-term in order to keep the pest numbers low.

It can be difficult to control pest animals in a dune environment due to the high level of public use and interest in the area. Early engagement of the community and signage to inform visitors can go a long way to getting support for pest control in amenity areas. Another way to yield benefits for the coast is to encourage adjacent landowners to control rats on their properties- no-one wants a rat nesting in their roof! The self-resetting trap technology (by Goodnature) is very convenient for non-resident landowners. With the huge enthusiasm for Predator Free NZ, now’s a great time to start a pest control group.

I’m sure you are all aware that the iconic green pastures of New Zealand were once vast wetlands and forests. Hopefully you are also aware that the destruction of New Zealand’s natural environment is ongoing. Coastal environments are no exception, and in fact are often more heavily impacted by human modification than most other ecosystems. Your dune restoration projects are helping turn the tide (figuratively speaking) of coastal ecosystem loss in New Zealand. The best action you can do to help protect coastal lizard populations is to continue the good work you are already doing- plant a variety of native species in and around your dunes, rocky shores, boulder beaches and coastal forests. Lizards eat small invertebrates (like sand hoppers, flies and moths), nectar and small fruit. In dunes, planting flowering and fruiting plants like sand coprosma and pimelea provides a great food source for lizards, as well as attracting insects. Knobby club rush (wiwi) and muehlenbeckia within backdunes provides dense foliage which makes great lizard habitat. Geckos love licking nectar from pohutukawa and flax flowers.

Another activity you might already be intuitively doing is planting to connect nearby patches of existing habitat. This is extremely valuable for lizards and other small animals. Imagine how hard it is for a 5cm skink to run across 2000m of sand to colonise a new dune. By planting between existing vegetation, you are creating dispersal corridors that make it much more likely that the little skink will succeed in finding a new home.

Does your coastal restoration project conduct beach clean-ups? Removing plastic and other rubbish from the beach is a great idea, but natural detritus like driftwood and seaweed can be an asset. Placing driftwood and seaweed in the dune system (while minimising squashed plants) creates refuges for lizards to escape from predators as well as somewhere to hibernate in cold weather. Natural detritus also serves other purposes- it is a source of food for native sand scarab larvae (they look like a huhu grub) and other invertebrates, it slows the wind, allowing sand and seeds to collect in the lee and providing nursery-like conditions for seeds to germinate. When the logs and seaweed eventually break down they provide natural fertilizer for dune plants.

So hopefully by now I’ve convinced you that our lizards are precious and need protection, but also that there are easy things you can do to help protect our native lizards. You are probably already doing some of the things I’ve mentioned above – thanks! Have a go at a few of my suggestions that you aren’t already undertaking.