Backdune plant communities show significant differences in both plant stature and species composition between vegetation zones from the foredunes inland. Immediately landward of the sand binders on the foredune, low growing sedge and rushes grade into woody ground cover native species followed by an increasing diversity of shrubs that merge into trees of increasing height progressing inland. This zonation varies from site to site depending on the severity of the climate, width of duneland, and any human-induced disturbance factors.

In 2018 the Coastal Restoration Trust along with the Ministry for the Environment and several partner organisations completed a three year backdune research project. This provides information on backdune species as well as tools and techniques for restoring backdunes in a wide range of beach types in New Zealand.

The backdunes species below are commonly used in coastal restoration programmes. In selecting the most appropriate species for each coastal site, Coast Care groups should refer to websites of their local councils, the Department of Conservation and the Plant Conservation Network of New Zealand (www.nzpcn.org.nz). These organisations will likely have localised species lists.

While the seaward face of the foredune is dominated by the native sand binders spinifex and pingao, these species, particularly pingao, can occur landward of this zone in semi-stable habitats where open sand occurs (refer to Coastal Restoration Trust Handbook Articles No. 7.1 & 7.2 for spinifex and No. 7.3, 7.4 & 7.5 for pingao). A small number of other low growing native species occur within this relatively exposed seaward zone including shore-bindweed, sand tussock, sand sedge in moister areas, and sand wind grass. 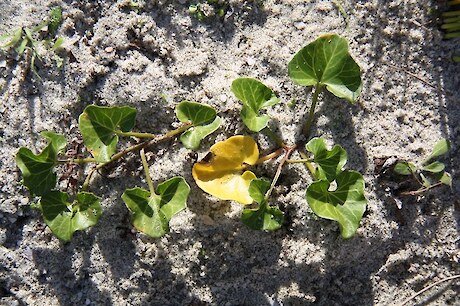 Shore Bindweed, Nihinihi, Sand ConvolvulusThe native shore bindweed is found growing on the foredune amongst spinifex and pingao, and also in the mid-dune area. It is sometimes mistaken for an exotic weed. Shore bindweed is a perennial herb with round leaves, stout fleshy roots and branching stems that form dense patches. It has solitary pink and white flowers appearing from October to March. It produces smooth, dark brown seeds. Shore bindweed. Regenerates naturally on most foredunes, often amongst a light cover of the native sand-binders. 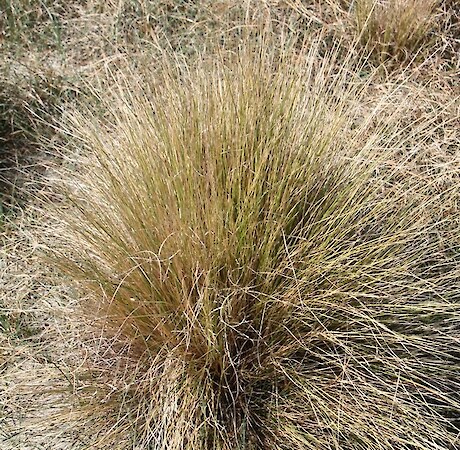 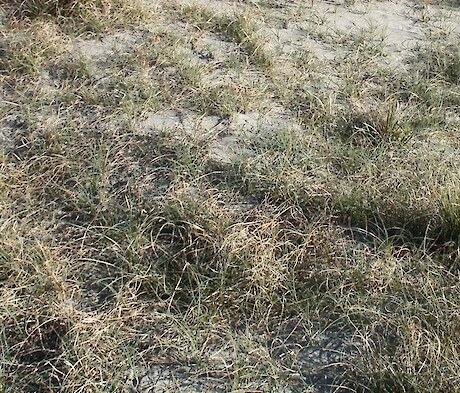 Sand SedgeThis native sedge is a sand-binder which is often found growing in damp, dune hollows, on the foredune and on edges of streams and rivers where they meet the beach. Sand sedge has short, pointed, blue-green, curled leaves which are often partially buried in the sand. Flowers appear from October to December, and fruits from December to June. The distinctive yellow-brown seed-heads are found near the base of the leaves. Sand sedge can be easily grown from seed and planted along the toe of foredunes near stream mouths. It often regenerates naturally from seed spread by freshwater.

Landward of the exposed semi-stable seaward zone is the increasingly more sheltered mid-dune zone. A wider variety of plants can grow in this zone. 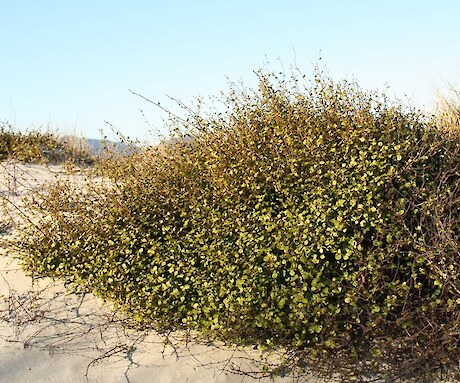 Pohuehue, Wire VinePohuehue is common on dunes where it provides shelter and food for several native creatures including the native copper butterfly that only lives on this species. This wiry vine has tiny, dark green leaves and forms dense springy mats up to 1m high. Numerous creamy white flowers appear in summer. Success from planting is better in sheltered, low lying sites. Pohuehue is often planted behind foredune sand-binders to discourage people from trampling them. Planting pohuehue with wiwi to increase shelter can improve establishment. 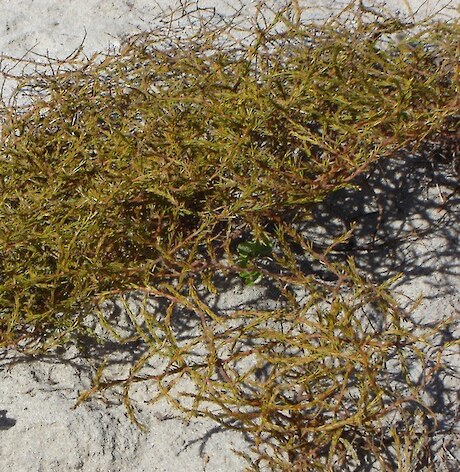 Sand CoprosmoSand coprosma is fairly common on dunes, but is becoming very scarce in some regions, such as Auckland. This low-growing shrub has small yellow-green leaves and produces pale blue, edible berries. Nursery-raised plants from locally collected seed can be successfully established on semi-stable, lightly vegetated sand flats and low foredunes.

The native shore bindweed found in damp coastal and river slacks or hollows. Oioi is a perennial herb, dark banding along the stem and tight clusters of flowers near the top of the stem in spring. The seeds are inconspicuous. Oioi can be easily grown from seed and planted along the toe of foredunes near the stream mouths. It often regenerates naturally from seed spread by freshwater. The salt that this plant absorbs from salty soil turns the stems a rusty red colour especially in late summer and autumn. 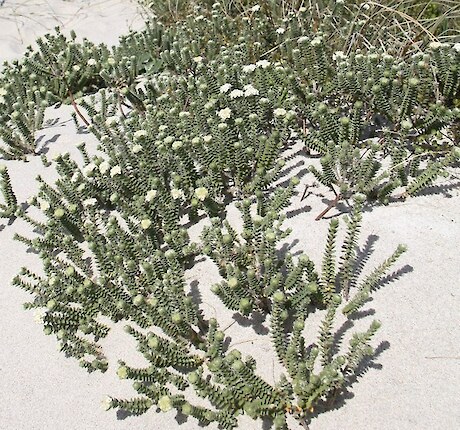 Sand DaphneThis endangered native plant is in decline and is now rare. Sand daphne forms low-growing circular shrubs scattered along the lightly vegetated transition between the foredune and mid-dune zone. This is a low-growing, sprawling shrub with small, pale green, velvety leaves. Flowers appear from September to March, and seeds from October to April. It is threatened by competition from invasive exotics, trampling by stock, browsing by possums and rabbits, seed destruction by rodents and vehicle damage. Sand daphne can be grown from seed or cuttings. 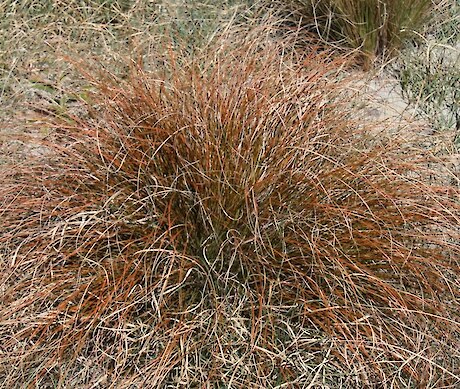 Speckled SedgeThis attractive native sedge is found only in New Zealand. It is very hardy and grows in a variety of habitats. Description: This bright orange sedge forms small, tussock-like, dense clumps up to 0.6m high. Flowers and Seeds: Flowers appear from September to December, and seeds from November to May (though seeds may be present throughout the year). Establishment: It is easily grown from fresh seed or by division of established plants. It can be grown in full sun or deep shade but prefers a free draining soil. 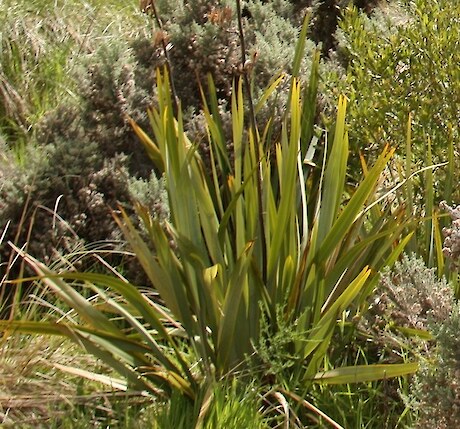 FlaxFlax is very common and widespread. It provides food for bellbirds, tui and silver-eyes as well as lizards and bees. An iconic structural NZ native plant, flax species form fan-like clumps of stiff, upright leaves up to 2m, with red flowers on tall stalks. Flowering usually occurs from October to December. Flax grows easily from fresh seed, but is usually grown by the dividing rooted fans from established plants. It’s best planted into damp dune hollows.

This native dune plant is often confused with the invasive pampas grass. Whilst pampas has stiff upright flower-heads ranging from white to purple, toetoe flower-heads tend to be fewer, softer and droop in comparison. Pampas leaves have a distinctive midrib but no distinct secondary veins. Toetoe in comparison has distinct secondary veins between the midrib and leaf edge. Pampas leaves snap readily when given a sharp tug, but toetoe do not. Toetoe leaves grow up to 1m and flowers up to 3m. Toetoe flowers from September to November and seeds from October to January (later in some areas). Toetoe is easily grown from fresh seed and division of established plants. 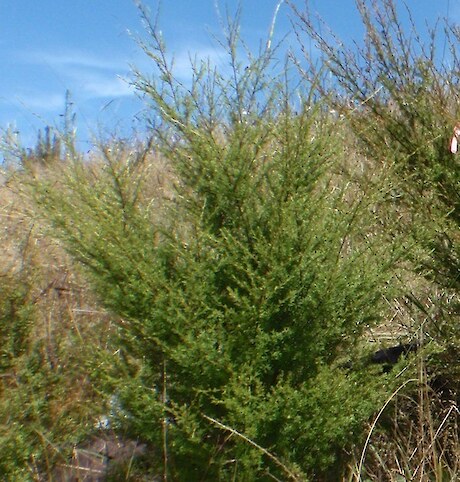 Sand KanukaSand Kanuka is endemic to the northern North Island and is most abundant from Kaitäia north. This variety of kanuka is in serious decline and is recommended for use in backdune restoration projects in these Northern regions. Sand kanuka is a small tree usually around 5m, but it can grow up to 10m. Its bark is chocolate brown to grey tessellated - somewhat “bubbly”. Its leaves are bright green, dark green or glaucous (bluish-green). The leaves and flowers are smaller than those of manuka and the leaves are softer. Small white flowers appear from November to January and seeds from December to June. Sand kanuka can be grown from seed. 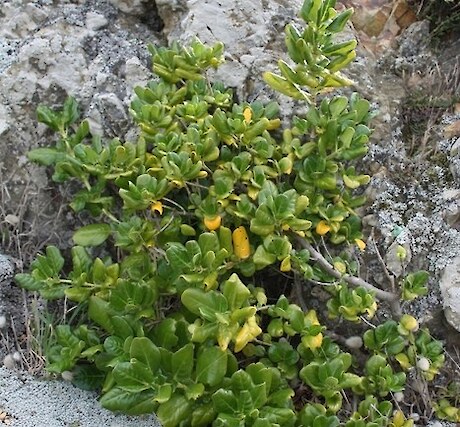 TaupataTaupata is a hardy coastal shrub found across a variety of sites from stable sand dunes through to rocky cliffs. A stout shrub with leaves that appear polished, are almost round and often rolled at the edges. The flowers are greenish white in summer. The fruit are bright orange from summer to late autumn and only occur on female plants. Taupata egenerates naturally on most mid to backdunes, and rocky shores throughout the North Island and upper South Island. 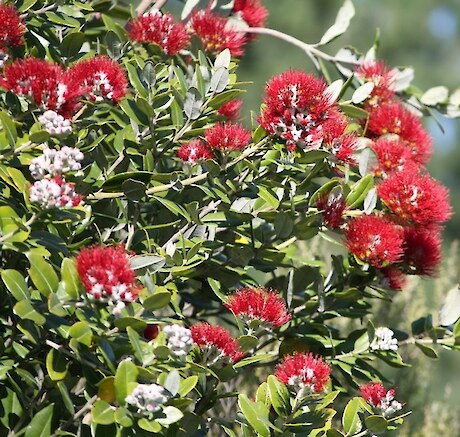 PohutukawaPohutukawa are an iconic feature of NZ beaches and coastal margins. The flowers provide nutrition for large numbers of native creatures including geckos which help in pollination and are also a favourite of possums. These large, evergreen trees often have multiple gnarled sprawling trunks that are the backdrop to many a holiday photograph. Bright red flowers are present between October to January and seeds appear from March to April. Pohutukawa are most at risk from possum browsing, which can seriously damage or kill trees, the roots are damaged by trampling and vehicles and large trees are vulnerable to fire. Pohutukawa can be grown from fresh seed collected from natural stands along the coast. Seedlings thrive best in sites with well-drained soil and side shelter from adjacent plants. Over the years, many pohutukawa have been destroyed by local residents if they impede sea views, so choose planting sites carefully and talk to seaside residents first. 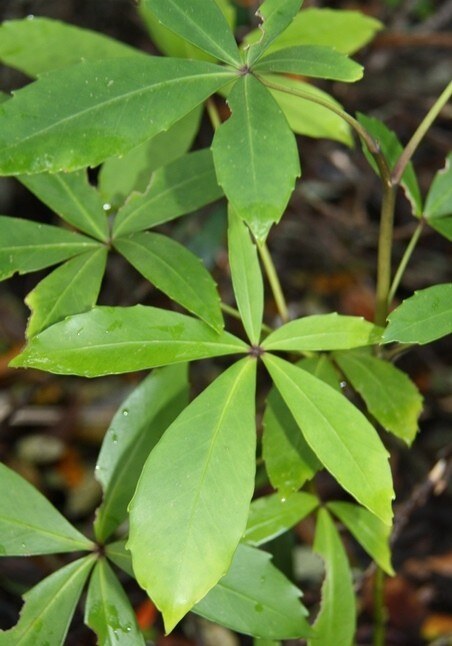 Coastal Five - FingerThis hardy, bright-green native tree is useful for planting degraded back-dunes in combination with other species. Houpara is a small tree that grows up to 6m tall. It has stout branches and glossy, green, leathery, hand-shaped leaves, often in groups of five leaflets. It has green flowers, and dark purple, fleshy fruit that appear in autumn. Houpara is palatable to stock and rabbits can ring-bark newly established plants. Houpara can be grown easily from seed, and establishes well on back-dune sites. 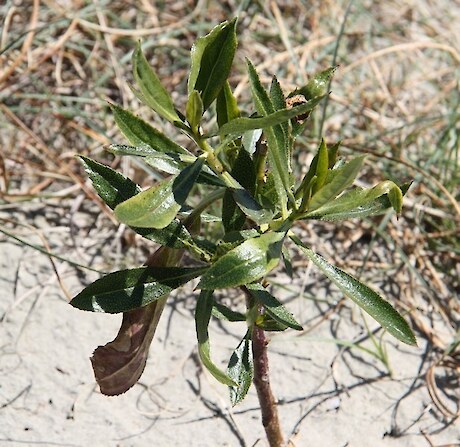 NgaioNgaio is mainly a coastal tree however it can be found throughout NZ apart from most of Southland. Ngaio can grow up to 10m high and has leaves with pale dot-like glands (most visible when held up to the light). Flowers, appearing from October to January, are small and white with purple shoots. Small reddish-purple fruit appear in early autumn. Can easily be grown from seed and planted within any stable dune area particularly in well sheltered sites. 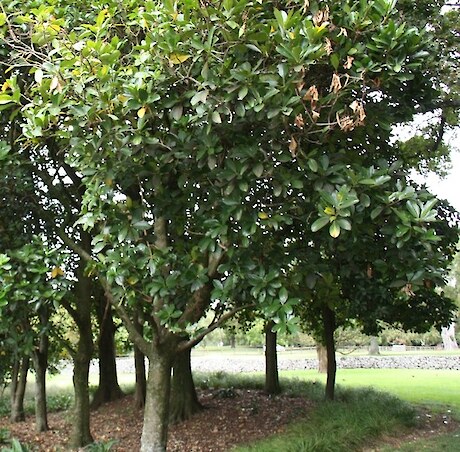 KarakaA medium sized tree up to 15m high found throughout the North Island and upper half of the South Island. Karaka leaves are large (10-15cm long), dark green, glossy above and below with the edges curled under. It has inconspicuous flowers but the fruit are bright orange when they ripen in summer and range from 2.5-4cm long. Karaka fruit are VERY POISONOUS, so be careful not to plant this tree close to where young children may pick up and eat the fruit. Karaka is easily grown from seed, however the seedlings are frost tender so prefer initial shelter for several years.