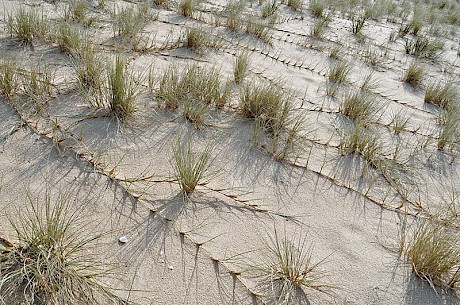 Spinifex seedheads are often seen tumbling down the beach in the wind. Photo: J BarronSpinifex (Spinifex sericeus R.Br.) is the major indigenous sand dune grass that occurs on foredunes throughout most of the North Island and the upper part of the South Island. Sometimes referred to as silvery sand grass, or kōwhangatara, it is the dominant sand binding plant on the seaward face of the foredune where its long trailing runners and vigorous growth make it an ideal sand dune stabiliser.

Where stands of spinifex are vigorous, runners will trail over recent erosion scarps caused by storms and high seas. These runners will encourage the build-up of wind distributed sand along the scarp and eventually a return to a low-angle dune face typical of a Spinifex dominant dune. 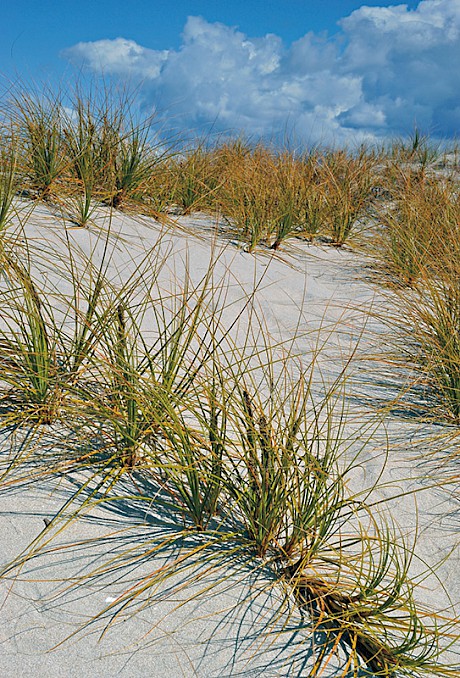 Pingao/pikao is harvested for weaving and was traditionally used for tuku tuku panels. Photo: J BarronPīngao (Ficinia spiralis) is a native sandbinding plant found growing on or near coastal foredunes throughout New Zealand. Pīngao once would have been found on almost every beach and mobile foredune throughout New Zealand but it is now only found as remnant populations or where active replanting programmes have occurred.

“Caring for the eyebrows of Tāne “

One version of the story of pīngao relates to the beginning of time when Tangaroa, God of the Sea was jealous of his brother Tāne Mahuta, God of the Forest, who had been successful in separating Ranginui, the Sky Father, from Papatūānuku, the Earth Mother. Tāne Mahuta wanted to end the conflict and so as a sign of peace he plucked out his eyebrows and gave them to Tangaroa. Tangaroa did not want to forgive Tāne and so he threw the eyebrows back on to the shore where they grow today as the pingao - the golden sand sedge at the boundary between forest and sea. And here Tangaroa is still fighting amongst the domains of Tāne Mahuta (Herbert & Oliphert, 1991). 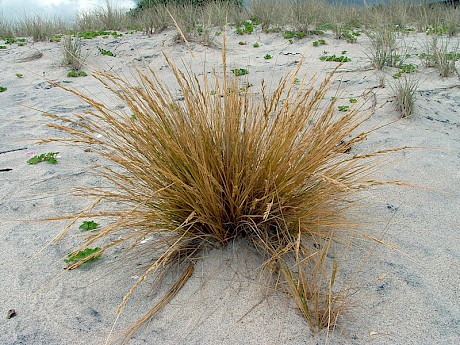 Once a common dune species, sand tussock is now sparse in much of NZ, except where Coast Care groups are reestablishing it. Photo: Coastline ConsultantsSand tussock or hinarepe (Poa billardierei) is a New Zealand native perennial sand binding grass. In the nineteenth century sand tussock was a common all around the NZ coast but due to habitat destruction through coastal development and damage of sand dunes via people and stock, populations are now scattered and sparse in the North Island with some larger colonies found in the south of the South Island.

Sand tussock forms erect tufted clumps of grass about 50-90cm tall. The leaves are smooth and shiny yellow green, are stiff and sharply pointed. Seed heads are present between January and May.

Sand tussock can be planted along with spinifex and pingao, depending on the historic vegetation pattern and environmental conditions of a site. Research has been undertaken as to the best way to collect seed, propagate and establish the plant and some commercial nurseries are growing plants for local sites.