PURPOSE OF THE GROUP:

The Wainui Beach Coast Care Group is made up of beach community residents who care about our coastal environment and want to actively participate in protecting and managing the dunes and biodiversity along the 6km length of Wainui Beach.

Our primary aim is to work with nature to encourage restoration and protection of the dunes eco-systems; and the secondary aim is to raise community awareness about the vital function of dunes in maintaining the health of the whole beach and as a buffer between the sea and land during storms.

Since forming in 2011, the Coast Care Group has worked together to plan and implement an annual work programme and developed collaborative working relationships with the Gisborne District Council (GDC) and others in the community.

GDC supports the group of volunteers by providing resources such as native plants, fertiliser, sprays, materials to construct coast care signage, and temporary fencing. The Council also occasionally funds visiting experts to provide on-site advice and to lead workshops with the community and with GDC personnel. The Department of Conservation Tairawhiti has assisted occasionally with equipment loans, and the Wainui Beach School and local Boardriders have participated in education activities and planting bees, along with Wainui-Okitu residents.

This first Plan was submitted to GDC in April 2012 for inclusion in the Council’s 2012/22 Ten-Year Plan, along with advocating that GDC work with the community to review and update the Wainui Beach Management Strategy.

Consequently, during 2012/2014 we actively participated with other community stakeholders and GDC to update the Wainui Beach Management Strategy - for which a Community Award from the Coastal Restoration Tahuna Ora Trust was received in 2016, and an IFA Facilitation Impact Gold Award was received in 2015 by GDC & the facilitator whom Council contracted for the strategy review.

Since 2012 we have been implementing our first Ten Year Plan to work with nature to stabilise and grow dunes through annual planting bees and maintenance in prioritised areas along the beach.

The initial focus has been to restore both the dunes toe in front of properties from the Wairere Road Playground Access Reserve in the south up to the Hamanatua Stream mouth, and the most damaged steep dues faces along Lysnar Reserve to the north of the Surf Lifesaving Club. 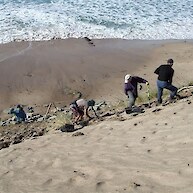 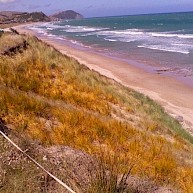 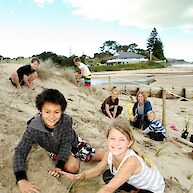 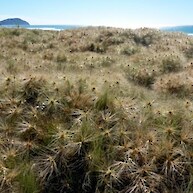 We divided the beach length into manageable strips, and each member is a ‘kaitiaki’ for a prioritised strip near their home. These strips are being restored in incremental steps from immediately north and south of Hamanatua Stream and the Surf Club, near the middle of Wainui Beach.

Late winter and early spring each year we organise working bees to plant native sand binding grasses, especially spinifex and some pingao, on the foredunes and some wiwi, pohuehue, flax and shrubs on back dunes.

To minimise human traffic damage on newly planted areas we have installed volunteer-built signs designed by local artist Tony Ogle, which are also marked for measuring sand accretion. In some high-traffic areas, temporary ‘fencing’ also has been installed - until that can be replaced with dense ‘barriers’ of flax. 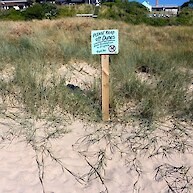 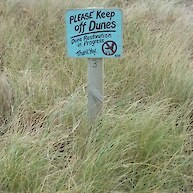 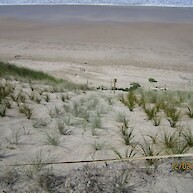 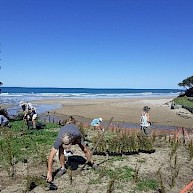 Significant dunes accretion has been achieved between Hamanatua Stream and the School’s Access to the south. And three large patches of bare sand have been stabilised with spinifex on Lysnar Reserve’s steep dunes face to the north, as has a re-developing dune toe below the Pines Access to one of the three nationally significant surf breaks along Wainui Beach. The Group has also worked with GDC engineers to replant a back dune hollow on Lysnar Reserve into which a new stormwater outlet was piped, and to plant wiwi on a bank at the Wainui Stream mouth.

In addition to providing an annual supply of plants, fertiliser and materials for signage, and some weed spraying, the Plan proposes that GDC support Wainui coast care work with:
• Permanent, attractive fencing along key sections along the top of the Lysnar Reserve dunes to encourage use of many stairways to the beach.
• Temporary waratah/batten and rope fencing along other sections of the top of the dunes until large flaxes are planted as a natural barrier.
• Temporary wooden battens and rope fencing 2m up from the beach along the steep dunes face from the Surf Club north to the Chalet access steps, which would be removed when enough re-planted spinifex and pingao is established on damaged slopes.
• Sand push-ups to re-form dunes where required for planting.
(For example, re-form a sloping foredune-toe, 2m wide x 1m high, south of the Schools Access Reserve for intensive planting with spinifex - by pushing up 1 cubic metre of low-tide sand for each lineal metre of dune-toe.)
• Explanatory signboards and publishing information brochures to increasing community awareness of the importance of dunes and coast care.

OTHER HOLISTIC BEACH MANAGEMENT RECOMMENDATIONS
In keeping with our holistic approach, other beach management recommendations made to GDC include:
• Improved control of the exit of Wainui Steam across the beach.
• Improved control of the exit of Hamanatua Stream across the beach.
• Reinstatement of the access stairs, removed in 2011, from the Lysnar Reserve playground to the beach.
• Removal of the macrocarpa trees from the dunes face by the Surf Club, and replace with native grasses, flax, and shrubs.
• Control of storm water flowing from Pines car park to the beach which is eroding the steep dunes face; and control of Pare St storm water which is damaging dunes at Coopers Access Reserve.
• Addition to the GDC website of Wainui Coast Care Group information.