The coordinator promotes the coastal restoration programme and works with a broad range of stakeholders, including Waikato Regional Council, Department of Conservation, Coastcare coordinators, local iwi, rural and suburban communities

For more information and to apply please go to this page.

A number of internships are available over summer with Northland Regional Council.

Opportunities are available in the following areas:

For more information and to apply, please go the the NRC website.

Myrtle rust is here to stay and continues to spread within Aotearoa, with devastating impacts on some species. It has been recorded in most North Island regions, although is still arriving at new localities within these regions. It is spreading more slowly in the South Island, but has already established further south than initially expected. Epidemiological concepts developed for other rust pathogens can help us to understand spatio-temporal spread for myrtle rust. Key parameters are wind, host susceptibility, host density and climatic suitability. Join us for this presentation by plant pathologist Rob Beresford, when he will examine the dynamics of spread and consider surveillance requirements, early detection in new localities and the use of climatic risk predictions.

Posted: 7 September 2021 in the Events category 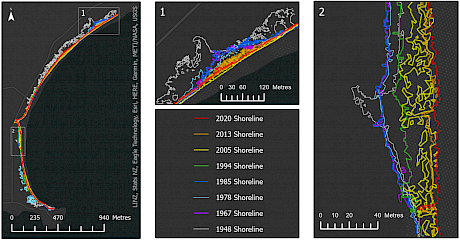 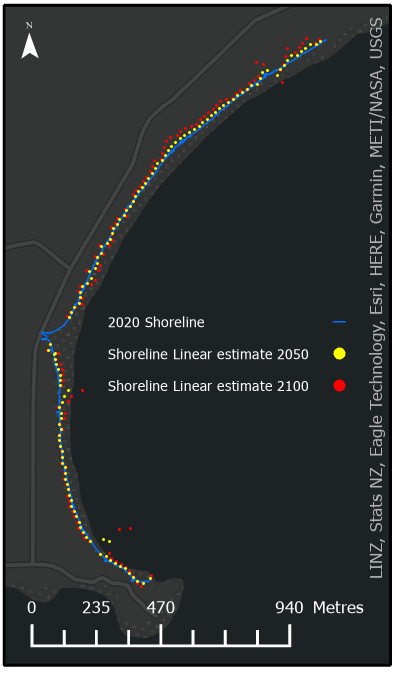 Figure 2: Estimate of 2050 and 2100 shoreline with linear net erosion / accretion. Errors using a linear model to predict a dynamic coastI have changed the scope of my study based on the sites I have chosen. Instead of landfill sites being investigated, I am just changing the term to anthropogenic debris. I took the main landfill site off my survey list due to it being a bird nesting site most of the year which became an issue with flying a drone around (birds tend to investigate by swarming). I have four sites which are Monkey Island, Colac Bay, Fortrose, and Curio Bay. The anthropogenic structures at these sites include concrete and structural rubbish throughout the dunes, an abandoned coastal road and housing development on the beachfront. Management and monitoring of these sites is important to prevent environmental degradation that this debris may cause as the coast changes around it. 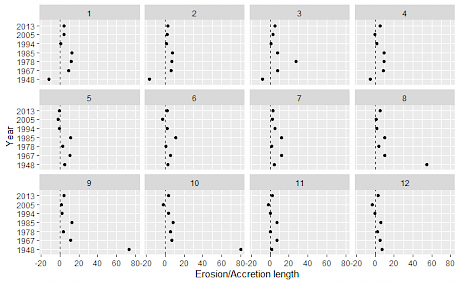 Figure 3: Distance of historic shorelines from the 2020 shoreline measured in metres. ‘0’ is the 2020 shoreline on the y axis, to the left of that are the years where erosion occurred and to the right is where accretion occurred. Each transect number was analysed (124 in total for Curio Bay) and the patterns were catergorised into four groups.I have been knuckling down on my research over the past couple months and have found some really interesting results! Over the past few weeks my focus has been on using historic satellite imagery to see if I can find patterns that occur on our coastlines that lead to erosion or accretion. This involved a lot of problem solving with my workflow and the outputs that would be optimal for my research. I have four sites but have been focusing my problem solving on Curio Bay (figure 1) to get a methodology sorted that can be easily replicated for my other sites (maybe future sites as well). I had created estimates of the shoreline in 2050 and 2100 but realised I need to go through and take out all the outliers (figure 2). The results were also linear which is not how the dynamics of the coast worked. I needed to work out how the dynamics worked to predict future shorelines more accurately. The distance of historic shorelines from the 2020 shoreline were recorded. Each transect computed on ArcGIS is 20 m apart and were individually analysed (124 in total for Curio Bay) and the patterns (figure 3) were catergorised into four groups. These four groups are eroding, accreting, stable and unstable (figure 4). This was then inputed back into the map to show where these four patterns were occuring. Time to dive into the ‘why’ these patterns are occuring where they are. 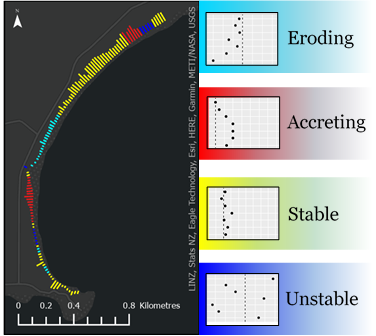 Figure 4: Transects of the shoreline at Curio Bay (length of transects differ for each year, this is then merged together). The transects were put into 4 groupsDrone work:

Figure 5: Cloud compare software comparing the May survey of the Monkey Island shoreline against the February survey. C2C absolute distances measured in metresI have two surveys completed for my drone work but unfortunately when I processed the images from the May survey, the model was skewed in a dome shape so any analysis I do between my surveys will not result in highly accurate outputs (figure 5). This was due to the nature of my survey area being long and thin and the drone not being calibrated properly beforehand. To counter this anomaly for my next survey I have made my survey area more of a square shape. I will do a second flight of each area from 100 m AGL (above ground level) to provide more information of the site for the processing software. My surveys are around 50 m AGL to get accurate fast imagery. Figure 5 shows the May survey of the Monkey Island shoreline against the February survey. The software used for processing was Agisoft Metashape Professional (Agisoft Metashape Version 1.7.2) and Cloud Compare (Cloud Compare software Version 2.11.2) was used to lay the different surveys on top of each other to capture the volumetric differences in the dune over the three months. C2C absolute distances is measured in metres (figure 5). The red in blotches in the images are cars that were present with one survey but not the other. The main information from this figure is the green horizonal dune line throughout the middle of the image, showing the dune changed around 30 cm from one survey against the other. The green on the sides of the image is caused by the May survey site imagery curling upwards due to wrong calibrations of the drone and as a side effect of having a small site. This imagery can be hard to interpret so I will investigate doing this analysis with software that is more widely used such as ArcGIS (ArcGIS System Software version 10.8.1).

A lot of the work I have done has been in understanding the coastlines and how to analyse patterns that may occur. I am hopeful this will be very beneficial in monitoring, management, and restoration of these coasts which I will investigate for the next part of my thesis!

Northland Regional Council is looking for a coast care person. This is a full-time permanent position which was approved under their recent Long Term Plan. It is to support the running of the Te Taitokerau CoastCare programme with a particular focus on relationships with iwi and hapū. A short list of the work involved is:

Go to the NRC website for more information and to apply. Applications close on 31 August.