Deadline for next newsletter is 7 November 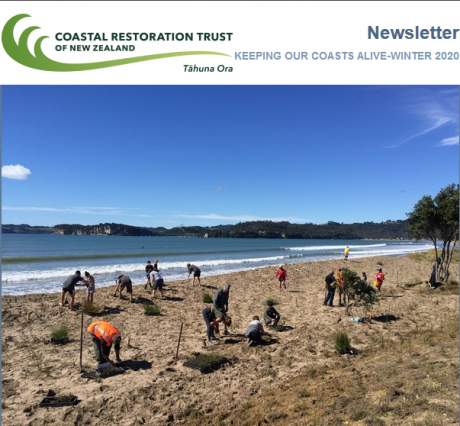 Go to our newsletter webpage if you want to contribute, sign up or read earlier issues: https://www.coastalrestorationtrust.org.nz/news-events/newsletters/

After having to keep this a secret for a few months, we are pleased to announce the news that we have been granted funding from the DOC Community Fund for a 2-year project to produce lots of educational videos on coastal restoration as well as hold some workshops. Read the news here.

Updates about progress on this project will be shared on our Projects page under Videos and Workshops.

We thank DOC for supporting this project.

Posted: 4 September 2020 in the News category

Join the Coastal team of the Resilience National Science Challenge for an update on their research activities at a FREE webinar on 6 August 11-12noon.

The research team will present their recent work on coastal adaptation using the ‘Dynamic Adaptive Pathways Planning’ approach, the application of this approach to new challenges such as managed retreat, and ongoing and future work on enabling proactive coastal adaptation.

This free webinar will be useful to anyone involved in climate adaptation and coastal planning within central or local government, iwi and hapū, and coastal communities, as well as researchers and students. There will be an opportunity to ask questions of the research team.

A recording of the webinar will be made available afterwards if you are unable to attend live.

Get the link here. Note that there is no need to book. You just follow the link to your calendar and a link to the webinar is in the information.

Spartina was introduced into New River estuary in Southland during the 1940s/50s to aid reclamation work being carried out in the days before they understood how important estuaries are. Spartina rapidly spread and by the time it was realised the impact it was having on the estuary it had affected approximately 800 ha of New River and spread into four other Southland estuaries.

Large scale control of spartina in Southland was started in 1989, led by the Department of Conservation, targeting the large infestations. While the control of these large areas was achieved several years ago the ongoing challenge has been finding isolated plants within the large tidal flats that make up our estuaries. This work has been carried out by a small team of experienced staff, spending hours searching for small isolated plants in very varied conditions. With fewer and fewer plants present, improving the ability to find these plants before seeding occurred was being discussed and it was out of these discussions that the possibility of being able to train a dog to find these isolated plants was raised.

While the use of Detector dogs in New Zealand is nothing new, the use of a dog to find a weed species at very low densities is.

In October 2017 Southland Department of Conservation staff talked with John Taylor, a local dog trainer, about the possibility of training a dog to find Spartina in areas of very low density. John obtained a young collie (Wink) and in a controlled environment was able to train him to indicate on spartina plants. A field trial was undertaken in an area in New River estuary in February 2018 where DOC staff searched an area and recorded any plants found then two days later the dog searched the same area and any plants found recorded. This trial proved very successful with the dog finding all recorded plants plus two extra that staff hadn’t found. Between February and April 2018 Wink was used in conjunction with DOC staff to search for plants in several of our estuaries and continued to show the benefit of using a dog to assist in this work. 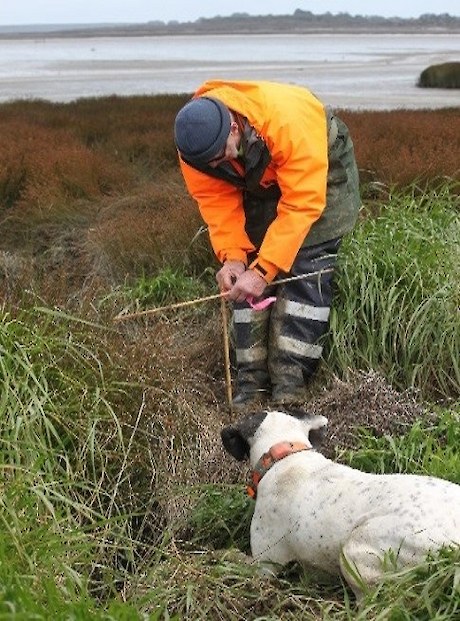 Early in 2019 a second dog (Bailey) was trained to detect spartina and started work in March 2019 being handled by a local DOC staff member. Both dogs work well together and complement each other with their different search techniques.

Three years ago, Kiwi bank became a project partner to the Conservation Dog Programme. This has enabled the Department to increase its work in both the pest detection and threatened species detection areas which includes supporting emerging new areas of work such as the Spartina programme.

The success of the dogs has seen John and Wink traveling to several different areas in the North and South Islands searching for Spartina on behalf of Regional Councils and DOC, with Bailey also spending 10 days working in the Nelson region this year.

While the use of dogs to detect spartina plants has proved very successful, the dog will not replace the small teams of very experienced staff who have spent hundreds of hours in estuaries searching for these elusive plants, but rather will work alongside these dedicated people performing a very important role.

We would like to receive some more nominations for our Coastal Restoration Award and have extended the deadline to 29 February.

If you know of any group doing great work, go to our Coastal Restoration Award page and fill in the form.

The award will be presented at our conference dinner in Southland on 19 March 2020.

This award is kindly sponsored by Coastlands Plant Nursery.