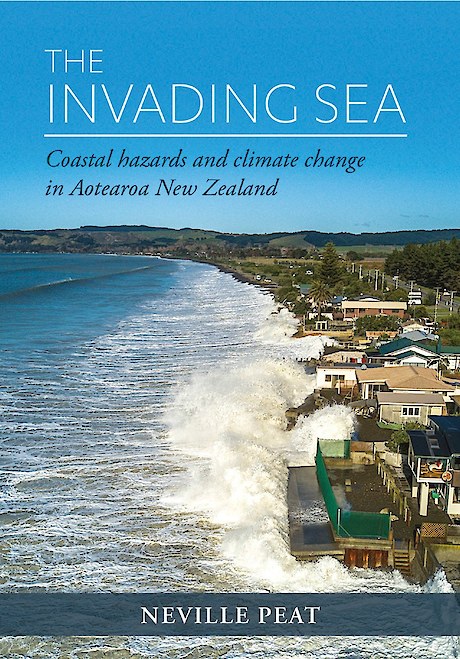 ‘Low-lying coast is a chronically grim frontline of climate change, socially and economically, and the frontline with the most to lose.’

New Zealand’s coastline, one of the world’s longest, is under attack. When cyclones and king tides coincide, there is double trouble at the sea’s edge – erosion and flooding.

Award-winning author Neville Peat investigates the multiple faces of coastal hazard – the science of a warming, rising, stormier sea; the risky reality for many low-lying communities; the shortcomings and often sluggish response of central government and councils; the engineered solutions and the curly question of insurance. As new ways of adapting to the dynamic new era of coastal hazards unfold, what should be done and who should pay? Personal profiles highlight the issues for individual coastal dwellers, many of whom demonstrate sleeves-rolled-up resilience. But ultimately there is a political edge to the issue of sea-level rise and extreme weather, and how to adapt.

This is the first book for a general audience about adaptation to climate-change impacts on New Zealand’s coast – impacts that are shaping up as the greatest environmental issue New Zealand and its low-lying atoll-state associates in the Pacific are likely to face in the 21st century.

Neville Peat lives close to the coast on Otago Peninsula. He has written extensively about New Zealand geography and the natural environment. His titles range from Antarctica to the atolls of Tokelau. He was a journalist in earlier years, but also served a total of 12 years as a councillor on the Otago Regional Council and Dunedin City Council. In the 2018 New Year Honours, he was made a Member of the New Zealand Order of Merit (MNZM) for services to conservation.

Detours – A journey through small-town New Zealand: A generation on (2008).

Prev item
All news
Next item