Austropuccinia psidii reproduces sexually and asexually. A knowledge gap about its reproductive biology is whether populations of this pathogen that were formerly structured (separated) by host range can reproduce on shared hosts. Join us for this webinar by plant pathologist and mycologist Alistair McTaggart, who has been delving into this research area. Recent work by Alistair and colleagues determined whether mating genes in three genomes of A. psidii (from Australia, Brazil and South Africa) were under selection, as a proxy for whether different strains can reproduce sexually on a shared host. They examined contigs that contained three homologs of the STE3.2 gene, which were near-identical in the three genomes, and the homeodomain locus, which contained two alleles of two homeodomain genes in each genome. The lack of variation in STE3.2 genes may indicate A. psidii uses bipolar mating, and there are implications for biosecurity if different strains are sexually compatible based on variation in the homeodomain locus.

To attend this webinar, or to receive a recording to watch after the live session, register here. After registering, you will receive a confirmation email containing information about joining the webinar.

Adrian Riegen will follow the story of the 2021 godwit tracking project.
The marathon migrations of these extraordinary birds continue to amaze and surprise us.
If you have been following our regular updates, join us to discover the inside story and have your questions answered.

Estuaries in a changing world: 7 lessons for long-term monitoring

Over a year ago, the Parliamentary Commissioner for the Environment released Managing our estuaries, a report that clearly outlines many estuaries are in trouble. Join us for a conversation about designing long-term monitoring programmes for estuaries, informed by our research.

The webinar is on at 11am on Wednesday 27 October.

Posted: 8 October 2021 in the Events category

Myrtle rust is here to stay and continues to spread within Aotearoa, with devastating impacts on some species. It has been recorded in most North Island regions, although is still arriving at new localities within these regions. It is spreading more slowly in the South Island, but has already established further south than initially expected. Epidemiological concepts developed for other rust pathogens can help us to understand spatio-temporal spread for myrtle rust. Key parameters are wind, host susceptibility, host density and climatic suitability. Join us for this presentation by plant pathologist Rob Beresford, when he will examine the dynamics of spread and consider surveillance requirements, early detection in new localities and the use of climatic risk predictions.

Posted: 7 September 2021 in the Events category

Have your say about vehicles on Muriwai Beach 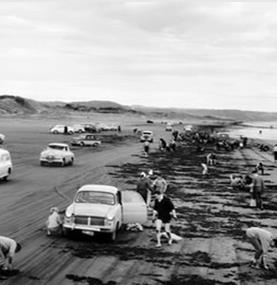 Have your say about vehicles on Muriwai Beach by 7 May 2021. The decision made could be precedent-setting and influence similar decisions around the country.

Go here for information and to have your say: https://akhaveyoursay.aucklandcouncil.govt.nz/driving-on-muriwai-beach

You might be able to find some useful information in the Coastal Policy Statement 2010, a summary of which can be downloaded here.

Prev page
Page 1 of 8
Next page