This is not an annual award, but one to celebrate the exceptional contributions of an individual to coastal restoration only when someone of very high calibre comes to our attention.

If you know of someone who has made more than a significant contribution towards restoring our coastal environments, please nominate them for this award. Please write to us, preferably with photo, why you think they should get this award by emailing us on or by sending your nomination to us at: PO Box 11302, Wellington 6142. 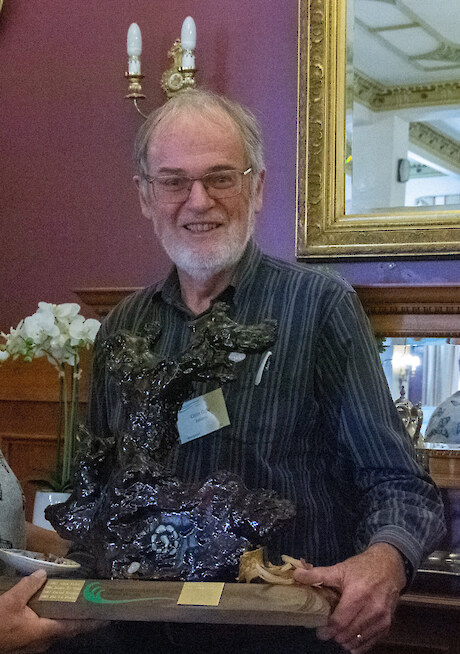 During the conference Colin Ogle was awarded our Pingao & Toheroa Award. Colin is one of NZ’s top botanists and an expert on anything to do with plants.

As a kid he was encouraged to tell the visitors to his parents’ property the names of all the plants in the garden and surrounds, so it is not surprising that he became so knowledgeable.

When Jim Dahm, winner of this award in 2020, visited Graeme La Cock at DOC in Whanganui in search of information on vegetation for his rear dune work, he was overwhelmed by the quantity and quality of the information available, from reports, papers and plant lists to individual plant records. One name dominated this work – Colin Ogle. A search of our literature database reveals over 100 entries for Colin. These actually span the country, several subjects, and go back to the 1970s. The earliest (1976) is about the effect of pines on biodiversity at Opoutere, Coromandel Peninsula. He has written about wildlife and wildlife habitats in Northland, and birds at Waitutu in southland. His most recent publication was on monocot weeds in the Manawatū Ecological Region, including the sand country stretching from Patea to Paekākāriki. In Jim’s view, he’s New Zealand’s leading coastal botanist.

He grew up near Hawera, taught in Wellington, joined the Wildlife Service’s Fauna Survey Unit from 1978 until he joined DOC in 1987 in Whanganui, where he retired about 15 years later. He’s still very active in the local botanical group, as he was in Wellington’s group when he lived there. He’s a stalwart. When one is privileged enough to work with him or share time in the field or a meeting room with him, one realises just how much he has contributed to the country’s knowledge on coastal matters (and inland, but we won’t go there now), particularly plants and habitats. He’s always been willing to share and teach, and has and continues to influence many people around him. He’s very patient!

Colin’s contributions have been recognised before, receiving the Allan Mere Award from the NZ Botanical Society in 2003, and the Loder Cup for services to conservation of vegetation in 2004. Nobody else has received all three awards. Congratulations, Colin. 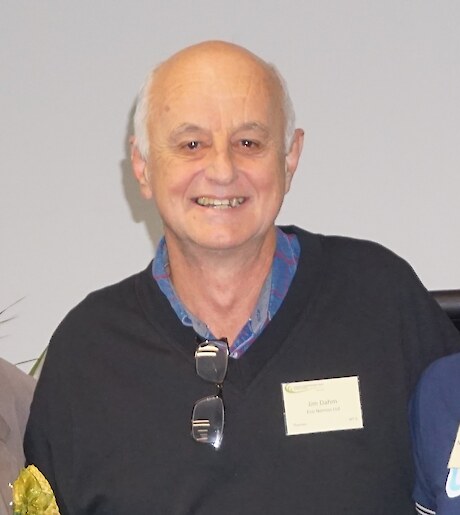 Jim Dahm was awarded our highest award for his life-time work on coastal restoration, mainly in the Waikato, Coromandel, Bay of Plenty and Auckland areas, at our conference in Southland on 18 March 2020.

Jim was a board member of our Trust for 12 years.

He is a coastal restoration contractor who knows how to deal with people and issues on the ground.

He has played a major part in many of our research projects over the years.

At most of our conferences he speaks about our projects and his own experiences and these have more recently morphed into full day workshops that are held the day before our actual conference.

Jim can be reached on.

Pat La Roche was awarded this prestigious trophy to recognise her 30+ years of dedication and persistence in coastal restoration in Auckland’s West Coast environment with particular emphasis on her work in the controversial Piha coastal area. Unfortunately Pat couldn’t be at the conference to receive the trophy, but a special presentation ceremony was held on 4 May in her home town.

In summary, Pat has, over 30+ years, made an exceptional contribution to the coastal environment on Auckland’s West Coast and her energy, enthusiasm and integrity in identifying issues, advocating for best practice at all times and her organisational ability in carrying out projects on the dunes marks her as a person of very high calibre indeed. 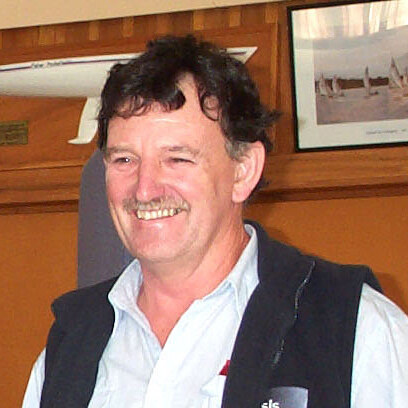 At the 2017 conference in Christchurch the Pingao & Toheroa award was presented to David Bergin.

David was first involved in dune restoration in the early 1990s when he met Jim Dahm and offered to set up trials to assess the establishment of Spinifex. In 1996, Dave was present at the very first meeting of interested parties called to find ways to produce Spinifex. This was held at Forest Research in Rotorua and from that meeting of representatives from eleven councils and other interested parties the Coastal Dune Vegetation Network was established.

The first thing the CDVN did was to set up trials to find the best way to produce Spinifex from seed. David was the leader of the group that did this work at Naturally Native in Tauranga. Results were very quickly obtained and within three years commercial quantities of Spinifex were being grown and planted by Coast Care groups.

The CDVN produced a series of bulletins that were mostly written by David. These and the workshops he was involved with throughout the country established the CDVN as the authority on dune restoration.

David is the ordinary man’s scientist. He communicates with all at a level that they understand, always willing to share his knowledge and recognise others suggestions as valid. At the academic level, he has published a number of peer reviewed articles in scientific journals.

The trust has carried out many successful research projects and David has been at the forefront of them all. He has instigated most of our projects, set up the trials and then spread the information gained to all who showed an interest.

David has been a trustee of the Coastal Restoration Trust since it first was set up as the Dunes Trust in 2007. 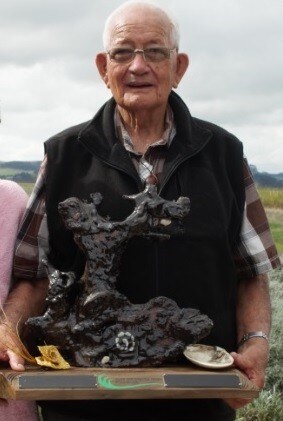 On 8 May 2016 the award was presented to James Te Tuhi of Te Kopuru, Dargaville for his work to restore the west coast dunes of Northland as well as his educational work, sharing information and experience to schools and other groups.

James has had many years experience in the harvesting and relocating of toheroa stocks from the Kaipara right up to Te Oneroa-ā-tohe ( Ninety-Mile Beach) alongside his friend Barry Searle. He has spent over 25 years voluntarily planting pingao and spinifex along Ripiro Beach near Dargaville, and translocating toheroa in order to enhance species numbers.

Passing on the information and experience that he has gained is also very important to James. He a key member of Te Roopu Whakaoranga o te Taha Moana Trust, which aims to replenish toheroa and pingao alongside each other on Northland’s coast. Through the Trust James spends a lot of time passing on Maori lore and ecological wisdom to schoolchildren.

James has worked closely with two Masters students and in 2003 was granted an honorary Master of Applied Science degree from the Auckland University of Technology for his work. That same year he was awarded a Queen’s Service Medal for service to the community.

James created the Pingao & Toheroa Award for us to be awarded to people who have made an exceptional contribution to dune restoration work. This year the trust decided to award this trophy to James himself because of the enormous part he has played in dune restoration in the region over the years.

“Alan passed away on 12 September 2016 after a life time of study, field research and teaching of botany, taxonomy and ecology of NZ flora. At his funeral in Mt Albert his sons, relatives and professional colleagues looked back on his passion for plants, ecology and the effect Alan had had on their lives. Alan’s observation powers, his meticulous recording and his detailed sketches of plants were recalled with admiration.

During the 20 years as a DSIR Botanist in Auckland he surveyed many plant communities and amassed his own regional plant collection, which he donated to the herbarium at the Auckland Museum. The culmination of his skills came in 2004 with the publication of “Wild Plants of Auckland”, the story of 322 plant species and their communities that grow wild in Auckland’s increasingly urban environment.

Altogether he put out 150 publications, many of them in the NZ Journal of Botany. Amongst these were some early reports on surveys of sand dune colonies of the Manawatu and West Auckland. These pioneering dune ecology reports earnt him the title “NZ Father of Sand Dune Ecology”. In 2015, in recognition of this work, Alan was the inaugural recipient of the ‘Pingao & Toheroa Award’ at the Dune Restoration Trust conference in Whitianga.This distinctive hand carved trophy depicts the curious relationship between the pingao sand binding plant and the toheroa life cycle. It was carved by Northland’s dune and shellfish researcher and activist James Te Tuhi”.